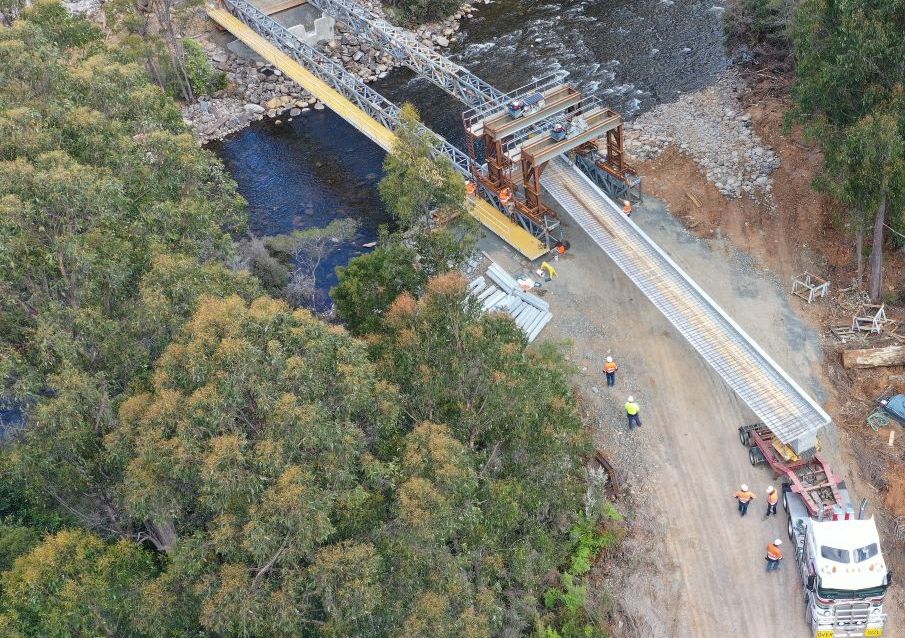 There’s a lot you need to be prepared for when you’re building a 27-metre-long bridge in Tasmania’s remote wilderness.

The limited mobile coverage. The cold and often unpredictable weather. The rising water levels of the river. The special equipment needed for the environmental conditions. And, don’t forget the logistics of moving 27-metre-long concrete Super T beams through tight winding gravel roads.

This was all in a day’s work for the VEC team that has just completed replacing the Florentine Bridge for Sustainable Timber Tasmania.

The new bridge has restored the forestry road link between Maydena and Wayatinah after the original bridge was deliberately burned in an act of vandalism in June 2016.

Parts of the new bridge, including the bridge deck, were constructed in-situ while the Super T beams were pre-cast in VEC’s manufacturing facility in Ulverstone and transported to the site. VEC has the ability to construct Super T beams up to 30 metres long.

Transporting the 27-metre-long Super T beams for the Florentine Bridge required a long combination vehicle, comprised of a prime mover and a dolly.

“The dolly needed to be steered manually to manoeuvre the beams around the tight corners for the last few kilometres of the road into the site,” said Paul.

“We also had another truck on hand to help if the prime mover got stuck on the gravel road.”

The team used a launching gantry to erect the beams. A launching gantry is used when there is restricted access for cranes. In this case, there was not enough room to set up a large crane on either side of the river.

“We don’t often have the situation where there isn’t room for a crane and we need to use the launching gantry,” said Paul. “It’s probably been about 10 years since we’ve needed to use it.”

There were a few other challenges to contend with on this project including the rising level of the river during winter and working in close proximity to the intake of a nearby salmon farm.

Work needed to be limited to the salmon farm’s shutdown period to avoid compromising the quality of the waterway, which could affect the sensitive fish breeding habitat.

Construction of the bridge was completed in early 2022.